The WRC’s ground-breaking new-generation of Rally1 cars from the three manufacturers gathered for the first time in Salzburg’s landmark Hangar-7 as the 2022 season was launched five days before the opening round at Rallye Monte-Carlo (20 - 23 January).

In the championship’s 50th season, the WRC will undergo major environmental changes as new FIA technical regulations drive the series towards a more sustainable future.

Plug-in hybrid-powered cars built around an upgraded safety cell chassis, 100 per cent fossil-free fuel and sustainable energy supplies are key to the sport’s commitment to a greener future.

The new hybrid challengers blend a 100kW electric motor with a competition-proven 1.6-litre turbocharged petrol engine, which has powered the sport’s top-tier cars since 2011.

President Ben Sulayem, a former WRC competitor himself, said: “Today’s launch of the new Rally1 era is a very proud and significant moment for the FIA and entire rally family and I would like to congratulate WRC Promoter for delivering a great show at the start of the championship’s 50th anniversary season.

“The enthusiasm for the FIA’s new technical regulations has been very much in evidence in recent months and the event further underlined the momentum coming from the teams and manufacturers, with Rallye Monte-Carlo just a few days away.

“Beside the hybrid technology adding a new dynamic layer of performance combined with safety improvements, Rally1 cars will be using 100 per cent sustainable fuel and work is also ongoing to achieve greater sustainability in the organisation of each round of the series. I look forward to an exciting season!”

WRC Promoter managing director Jona Siebel welcomed the start of a ‘landmark period’ for the championship.

“Tonight we’ve seen what the future of the WRC looks like,” he added. “I applaud the manufacturers’ hard work and commitment in readying these amazing and innovative Rally1 cars for the WRC’s new era.

“This evening was a marvellous opportunity to showcase the WRC and exhibit the strong desire to create an environment where both fiercely competitive motorsport and the planet can thrive together.”

While competitors have already benefited from e-safety training focused on the introduction of electric power, the spotlight will be turned on schooling stageside fans ahead of each of the 2022 campaign’s 13 rounds.

The FIA, commercial rights holder WRC Promoter and individual event organisers will join forces to post safety messages on social media, on websites and in traditional media in the run-up to and during events.

“The key message is for fans to look for the green light on the new Rally1 cars,” said FIA safety director Tim Malyon.

“All Rally1 cars now feature hybrid electric powertrains. With this comes new precautions for fans in the event of a crash or another type of incident due to the high-voltage electric current the cars generate.

“Solid green lights on the windscreen and both side windows mean it is safe to touch a stationary vehicle. A flashing red light accompanied by an alarm, or if no light is visible at all, means fans must keep away.” 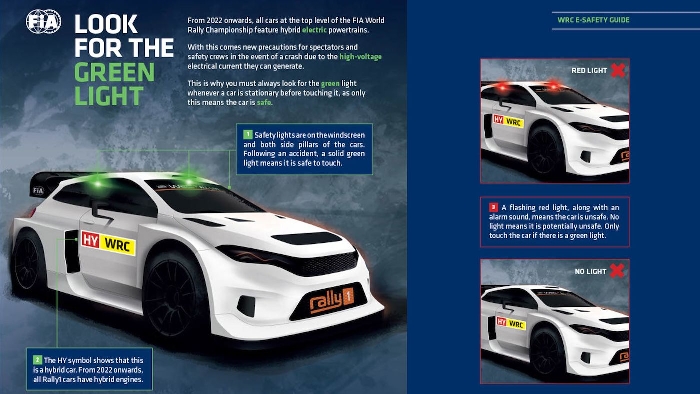 All top-tier Rally1 cars built and developed by Hyundai Motorsport, M-Sport Ford World Rally Team and Toyota Gazoo Racing will carry an ‘HY’ graphic on both doors instead of the competition number. The ‘HY’ text, signifying a hybrid-powered car, will be in white on a red background.

The car’s competition number will remain on the side windows to allow spectators to easily identify the crew.

The zero car, which drives special stages in advance of competitors to confirm spectators are located in safe positions, will also help spread the safety guidelines.

It will be fitted with a black and green door panel carrying a ‘green light = safe to approach’ message on one side. The other side of the panel will display the ‘HY’ text in the same place as on competing Rally1 cars.

All Rally1 cars must carry two pairs of class-0 gloves capable of withstanding 1000 volts that can be easily accessible for the driver and co-driver when vacating their car.

This will enable both crew members to provide valuable assistance in the event of a high-voltage issue affecting their car or that of a competitor. They must be used if red warning lights are displayed on a car when help is being offered.

General safety advice will also be stepped up on social media and via posters at the entrance to major fan zones, urging spectators to ‘get with the in-crowd’.

These will encourage fans to populate the designated areas during an event, with secondary messaging to reinforce the important safety reasons for doing so.

“We urge fans to enjoy the WRC from the safety of spectator areas – that’s where the show takes place,” added Malyon. “These designated zones are designed to provide great viewing in the safest locations. Get with the in-crowd and choose your place to watch wisely.” 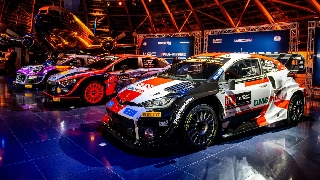