Lambda Sensor Damages by Oil – A Technical Guide from NGK-NTK

NGK internal warranty testing department noticed that damages on claimed sensors could be traced back to oil pollution.

This damages are caused by external influences, not caused by NGK/ NTK. Therefore these claims are rejected.

How does the oil get into the sensor?

Leaking engine components, which are connected to the same wiring harness as the Lambda Sensor (e.g. oil pressure sensors) press oil into the wire. This is a stranded wire, which consists of very small, individual stranded cords.

The so-called capillary effect, that describes the characteristic of stranded wires to sucks oil (this effect is known from a wick in an oil lamp or candle) causes the oil to be sucked “into” the wire.

Why are Lambda Sensors destroyed by oil?

If oil enters the sensor via the connection wires, it penetrates the area of reference air. Due to the fact that the sensor becomes very hot when the engine is running, the oil evaporates. The evaporation gas contains less oxygen then the reference air.

How to detect if the Lambda Sensor was destroyed by oil?

This can be achieved by a thoroughly visual inspection of the inside of the sensor connector. Even if the connector on a first glance seems to be completely dry, a careful visual inspection (a magnifying glass can help) often shows small oil traces on the electrical pins.

A different method is to use absorbent paper : Touch the inner contact with this paper.

Even the smallest trace of oil is a sign of oil pollution.

What to do if oil is detected inside the connector?

Only exchanging the Lambda Sensor is not enough. The source of the oil must be identified and leakage must be stopped. Otherwise, after a short time period, the oil will be sucked through the wires of the new sensor, destroying this as well. 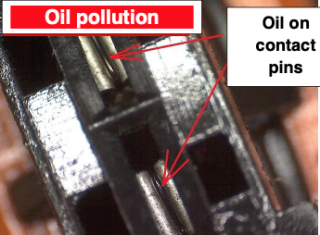