Schaeffler in Partnership to the DTM

Schaeffler is the series and innovation partner to the DTM

Power and outstanding performance, thrilling action on the track, and cutting-edge internal combustion engine technology – that is the DTM. Since 1984, this racing series has been attracting fans with a combination of enthralling motor sport and a colorful program of entertainment with additional high-level racing series that are held during the race weekends.

The 2021 DTM season will see the debut of cars designed according to the FIA’s GT3 regulation. Schaeffler has been the official series and innovation partner to the DTM since the end of 2020 and, with its technological expertise, is actively helping to make sure that the racing series has a promising future. One example that embodies this is the use of the Space Drive steer-by-wire technology developed by the Schaeffler Paravan joint venture in two DTM cars during the 2021 season. At the same time, Schaeffler is also developing the electric drive system for the electrification of the DTM. What is more, this season will mark the first time that Schaeffler is represented by two partner teams: Walkenhorst Motorsport and Abt Sportsline.

Schaeffler has been actively involved in the DTM for many years and has been supporting drivers and teams with its expertise in motor sport and technology:

The DTM is taking a step in a new direction. In 2021, the series will see GT3 cars and privately-owned teams competing for the first time, with Schaeffler as its official series and innovation partner. The new regulation means that the starting grid will feature significantly more brands than ever before. In addition to Audi and BMW, Ferrari and Mercedes-AMG will now also be among the teams competing for the DTM crown. This season will see two cars competing in Schaeffler colors for the first time: The BMW M6 GT3 – the new #GreenMachine – operated by Walkenhorst Motorsport and driven by two-time DTM champion Marco Wittmann, and the Audi R8 LMS GT3 operated by Abt Sportsline and driven by Schaeffler brand ambassador Sophia Flörsch.

At the same time, Schaeffler is also actively promoting technological developments for the future of the DTM and is in the process of developing the electric drive system for its electrification, which is set to become a reality in 2023 with the DTM Electric. The DTM’s program of social events for 2021 will include appearances by the DTM Electric demonstrator car. The program will also see the BMW M2 Cup champion crowned – and Schaeffler is also a premium partner here, represented by brand ambassador and BMW M Motorsport driver Carrie Schreiner.

Yes! Double victory in the first of the two #MexicoEPrix. The eleventh triumph for @LucasdiGrassi in the @FIAFormulaE and for @ReneRastRacing in second place his best result in the Formula E World Championship so far. More like this, please! pic.twitter.com/soJgQKFx7A 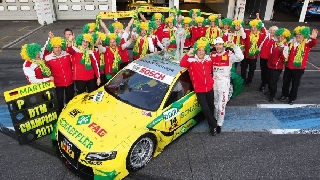